View to Living Room and to Stairs to Lower Floor

View of the Dining Table from Sofa

View of the Garden from Ground Floor

View of the Garden from Ground Floor 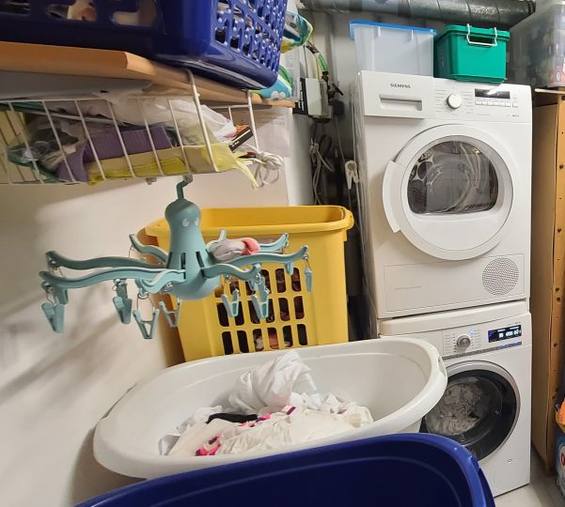 View to Bedroom 1 and 2 Lower Floor

Skyline View from the fields near our House

View to the Mountains from the fields 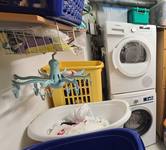 Use of Personal Car is preferred

Our cosy Townhouse, spacious enough even for bigger families, is situated in Eschborn, at a short distance from Frankurt am Main. It is just 15 min drive or 30 min suburban train to Frankfurt International Airport (FRA).
The house has 4 floors and can accommodate 8 – 10 persons easily. Children are welcome of course.

Lower floor: 2 bedrooms with queensize beds (140x200) – each with a exit to backyard, one of them with 32” Flatscreen TV, bathroom with tub bath and toilet, guest toilet, Utility room with Washmachine, Dryer and Ironing Station.

2nd floor: cosy bedroom with queensize bed (160x200) with a very nice view of the skyline of Frankfurt, exit to the huge roof terasse from where the splendid skyline view of Frankfurt can be enjoyed – 2 outdoor lounge sofas, chairs, table and parasol

There is a small front yard with 2 bike sheds and a back yard with a outdoor sofa set, chairs and 2 parasols.

The house is equipped with special water purification and can be used as potable water.

Free parking in front of the house as well as 2 private parking lots behind the house.

Optional use of bikes and car.

Our House is located in the surrounding of fields – again with stunning views – on one side skyline of Frankfurt and on other side Taunus mountain hills. The location is ideal as there is no heavy traffic but still not far away from Frankfurt City Center and on the other side splendid mountain peak called Feldberg.

Other european cities such as Rom, Madrid, Barcelona etc. can be reached with flight in short time.

Frankfurt is a cosmopolitan city with lots of cultural attractions such as Römer, The Old Opera, The English Theater, Series of Museums on Main Riverbank and long Main River Promenades on both sides of the River which can be explored on feet or by renting e-scooters.

Please take your shoes off at the entrance room to avoid dirt in the house.
It is important for us to come back to a clean home. Please treat our home as if it were yours.

Use of Personal Car