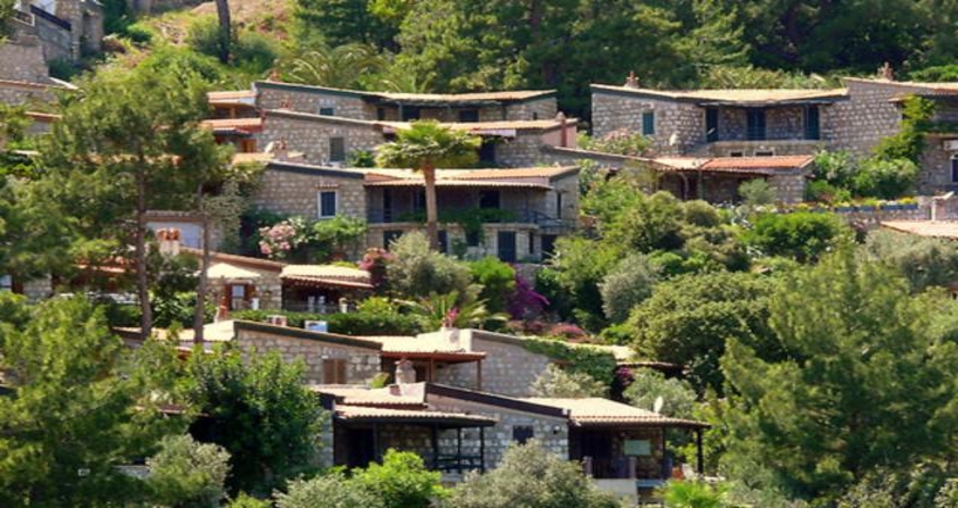 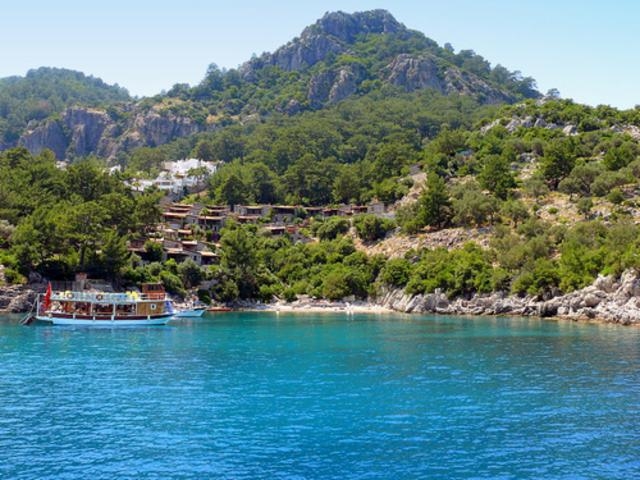 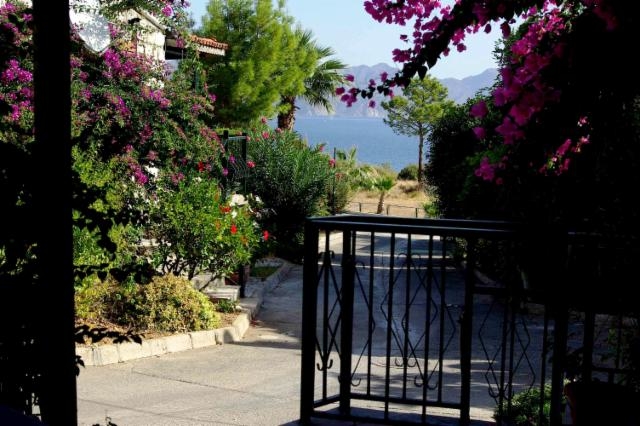 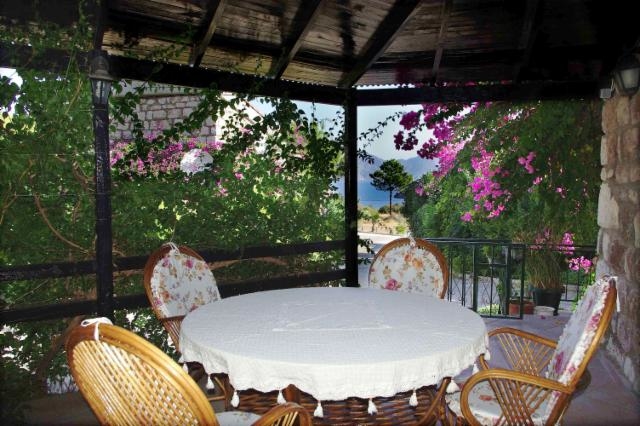 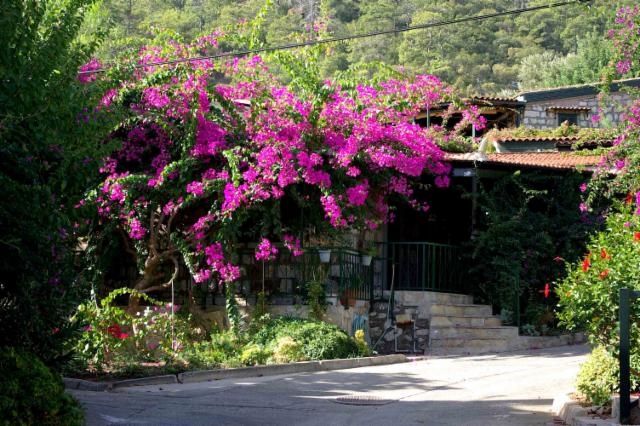 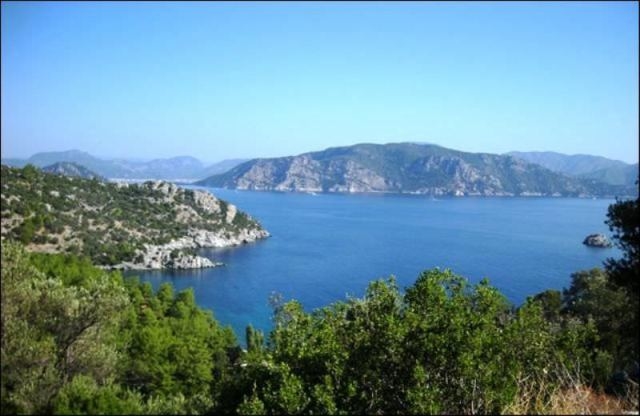 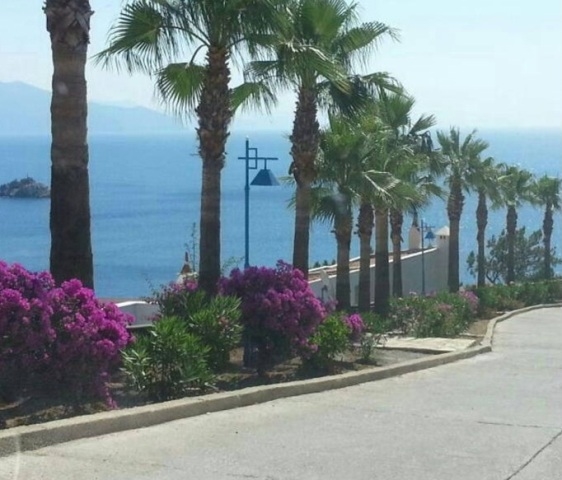 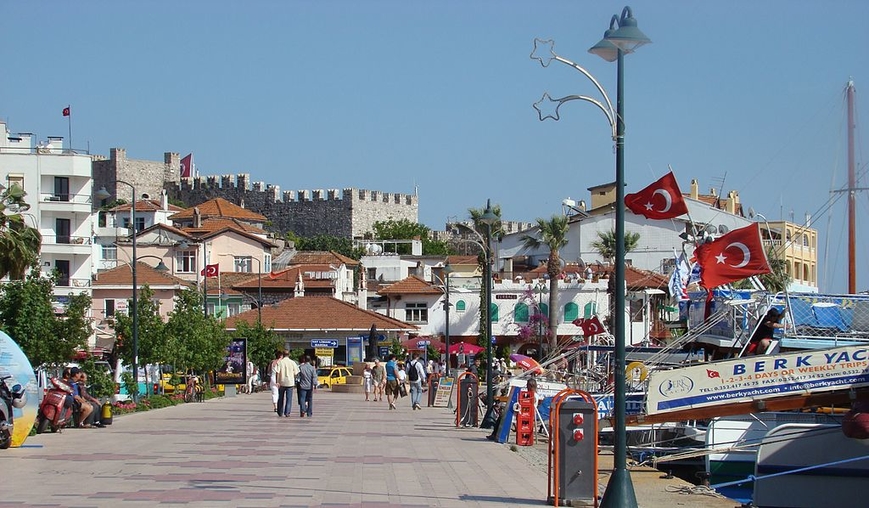 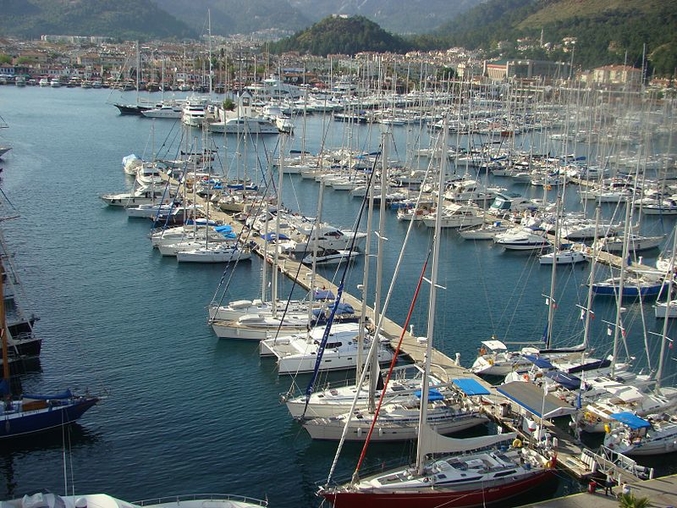 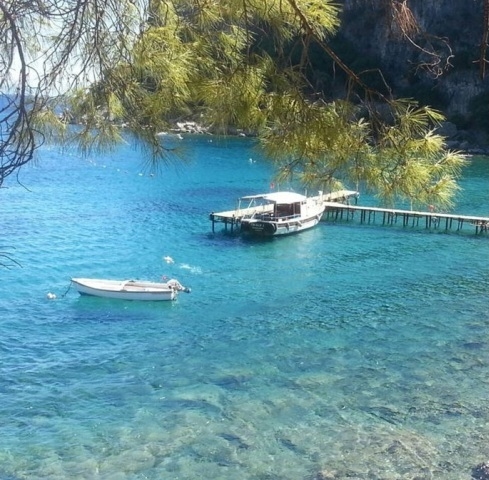 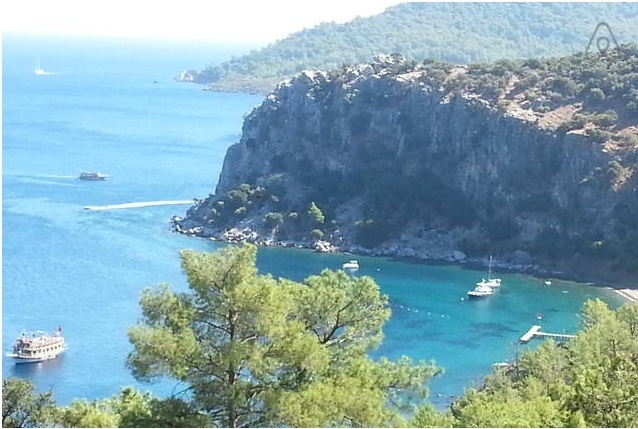 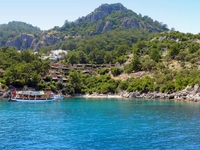 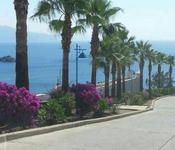 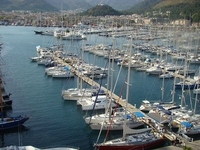 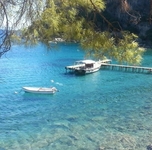 Turunç is a popular tourist destination in the Marmaris district. It is located 20 km south of Marmaris on the Mediterranean sea, surrounded by the Taurus Mountains. Our stone house is located in a small site (Professor’s village) next to the ancient city of Amos with security and two privately reached unique beaches. All houses are designed by architectures to reflect Mediterranean charm and life. Each house has some certain distance to each other and has as a different view plus professional gardening you will have total privacy during your stay.
One of the beaches has a long seashore and a restaurant along with. The other smaller one looks like almost privately build for it’s habitants, a small hidden clear blue aquarium. Guests will have access to both beaches; there are many benches, tables, umbrellas, chairs and shower in use. There is also a swimming pool a bit far from the sea, uphill inside of the site.
The house is with two rooms, with open kitchen. Both rooms have their private baths. It is possible to accommodate five people at the same time. Full furnished and each room has own air conditions.
“AMOS Profesörler Site” is in a remote area, 2.6 km. to Turunç Village. Public transportation operates every hour from from May till end of September. But, better to have a car to be mobile enough for sightseeing in bays and mountain villages. Free parking is available in site. Shuttle busses from Dalaman Airport to Marmaris and minibuses from Marmaris to Turunç are available. Passenger boats operate between Marmaris and Turunç as well.

The area is a former fishing village, and has populated since ancient times as the sea offers a variety of precious resources. Despite the region’s fast development in recent years, the natural beauty Turunç has been preserved. As a resort, the village has won the Blue Flag award in recognition of its clean beach and water quality. The size of Turunç is about 1 km, taking half an hour to walk from one side to the other. The water front features restaurants, bazaars and bars, however due to the nature of the resort there are few exclusively adult establishments.
Marmaris, which is 20 km. away to Turunç, is a port city and one of the most important tourist destinations on the Mediterranean coast. It is also a major centre for sailing, possessing two major and several smaller marinas. It is a popular wintering location for hundreds of cruising boaters. There are regular ferry services to the Greek island of Rhodes, and large cruise ships call at the port.
Marmaris has a Mediterranean Climate characterized by a hot and humid summer and cool, rainy winter. Showers and rain are very unlikely between May and October. Summers are hot and humid, and temperatures can reach over 40° C sometimes during heat waves in July and August. October is still warm and bright, though with spell of rain, and many tourists prefer to visit in the early autumn, especially in September, because the temperatures are not as hot. Winters are very mild and frost occurrence is rare. Winter is the rainy season, with major precipitation falling after November.